I’ve been wanting to write about the crucial role of spoken output in language learning for a while. While exposure to the target language – especially in the form of comprehensible oral input – is definitely the sine qua non of language acquisition, I would argue that output is as indispensable as input. If you have been teaching a foreign language for a while, your experience alone tells you that the more your students speak in the target language, the better they get at communicating in it. You don’t need much more empirical evidence than this.

Input Is Not Enough

However, we all have colleagues who stubbornly defend a heavily input-based teaching philosophy, and who delay engaging learners in meaningful speaking tasks until they have “learned” more of the language and are therefore more “ready” to use it. Because this whole blog is about increasing speaking practice, I thought it was about time to list a few arguments on the relevance of speaking for language acquisition. They may come in handy next time someone tries to convince you that output isn’t that important. 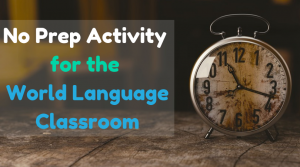 Benefits of Speaking for Language Acquisition

Again, if you’ve been teaching a foreign language for a while, you don’t need me to tell you that speaking is essential for acquisition. After reading this post, though, you also know a bit more about how it is that acquisition is promoted through speaking. Robinson, P. (1995). Attention, memory and the “noticing” hypothesis. Language Learning, 45, 283–331. Schmidt, R. (1990). The role of consciousness in second language learning. Applied Linguistics, 11, 129–158. Schmidt, R. (1993). Awareness and second language acquisition. Annual Review of Applied Linguistics, 13, 206–226. Vygotsky, L. S. (1962). Thought and language. Cambridge MA: MIT Press.
Research
Susana Perez Castillejo
Share Post: