Spice up the Classroom with a Cooking Competition on Extempore!

These days you can't turn on the TV without seeing a cooking show. Some of them are the competition type with the red-faced celebrity chef screaming at the contestants. Other cooking shows are more of the travel type where a host visits a particular restaurant to publicize the hard work of regular folks doing their best to earn a living while cooking. There are even a few out there that still attempt to instruct the viewer on how to cook. Whatever the format, food-based television seems to be, and has been for some time, all the rage. Well, why not tap into that trend by bringing it to the world language classroom?

We world language teachers probably all teach a unit based around food at some point and I imagine, at least outside of a true beginning course, we'd all like our students to be able to do more than simply list fruits and veggies. We want them to do something unique, creative, and significant with the language that they're learning. What about your own in-class "cooking" competition? If your students are anything like mine, they've seen these shows before and understand how they work. Tell your students at the beginning of the unit that they'll be "competing" a few times throughout that unit via Extempore to come up with a unique spin on a standard dish. Think hamburgers/sandwiches, pastas, salads, soups, or cakes, which are all versatile enough so that students can think of creative ways to make their own even if they know nothing about food and/or cooking. Anyways, here's how it could work. Assessment 1: The first Extempore speaking assignment for this competition may actually be their audition tape. Tell them that they should invent a competition persona in which they introduce themselves, say who they are, what their experience with cooking is, etc. Obviously, this can all be made up and is just for fun. But hopefully it'll get them in the right mood for their cooking "challenges". Assessments 2, 3, 4, etc.: Then give the students a series of speaking assessments (each one of which would be their next cooking challenge) in which they describe how they would prepare a traditional salad or hamburger or plate of spaghetti, etc, but in their own style. If they've adopted a reality television-like persona, encourage them to stay in character all the way through! Or maybe you can even spice it up a little bit by providing extra challenges, like telling them something has to be vegetarian or that they can't use a particular ingredient. Don't forget though: regardless of proficiency level, you'll need to scaffold the activities by providing the necessary vocabulary and pertinent grammatical structures. 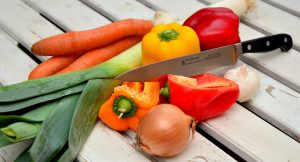 Then, on the day each assessment is due, play back student recordings in class, thus providing some listening comprehension practice. Consider having the class vote on who came up with the best interpretation. You could even assign and tally points and by the end of the unit elect a winner who wins some sort of prize. Unfortunately, speaking the target language is often associated with anxiety and frustration, but I think this sort of classroom competition could really generate some excitement in class and enthusiasm for speaking the target language!
AssessmentAuthentic+ 3
General
Susana Perez Castillejo
Share Post: